Now and then……..I can’t image a life without this amazing boy.  He is my heart dog!!!  (He looks so serious striking a pose in both pictures.)

As a thank you to my Golden Valentine we went for a walk (just Mom and her boy) to Tim Hortons to get him his favourite treat.  He usually only gets a Timbit but today we went for the whole donut. 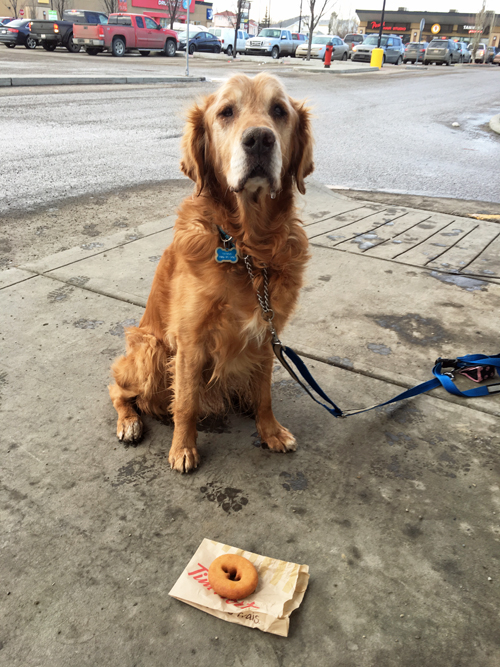 Linking up to Wordless Wednesday @Blogpaws
Powered by Linky Tools

I love it when we can start our mornings out on the deck enjoying our morning coffee/tea together. 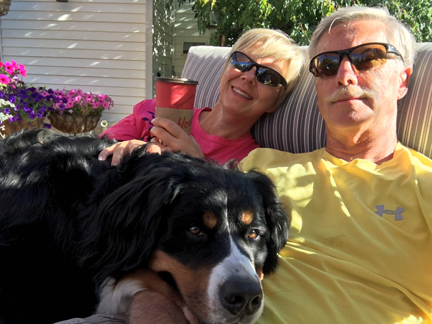 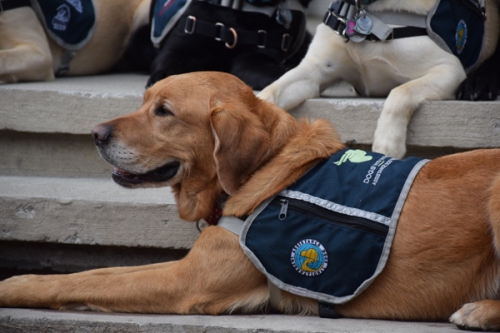 On Sunday I attended the graduation of one of Wally’s children.  I have a very special spot in my heart for Garnet.  Of the 51 puppies that Wally’s sired, he is the only one that really looks like his Dad.  He spent the first few years of his working life as a guide dog for a wonderful gentleman.   Sadly he passed away suddenly and Garnet was returned to the school.  They decided that he was too young to retire so they retrained him and placed him with a psychologist to act as a therapy dog for her clients.  Garnet is 7 years old now and watching him and his mannerisms….OMG he is definitely his Daddy’s boy.  He has the same loving and gentle personality.  Here is a picture of the whole graduating class.  Garnet’s beautiful deep golden colour makes him stand out in the group….”one of these is not like the others”. 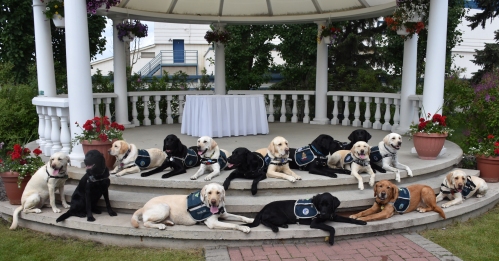 When they arrived, Garnet’s nose went up and he started air scenting and wagging his tail wildly.  He knew we were there and he was excited.

I was able to get up close and snuggle with my beautiful grand-puppy.  Isn’t he just beautiful.

A blast from the past…..in 2010 we had this photo taken (courtesy of Laughing Dog) of Wally and Garnet just before Garnet went into final training to be a guide dog. 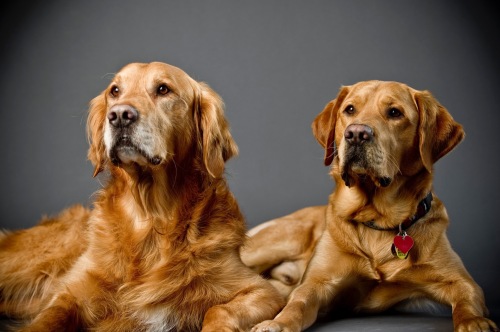 Linking up to (not so…) Wordless Wednesday at Blogpaws:

To say we are blessed to have our beautiful Golden Boy at the ripe old age of 15 is an understatement.  Not only is he still with us but the quality of his life is really good.  He is my “heart” dog.  I love all of my fur kids but he and I have this very special bond that I just can’t put into words.  I can’t imagine life without him….

Wally’s favourite treat are Timbits.  Traditionally he gets one for each year.  Once he got into double digits I started cutting them in half.  Today I cut two ends off of each one and left the slice in the centre for the other dogs.  It didn’t take him long to polish off 15 ends. 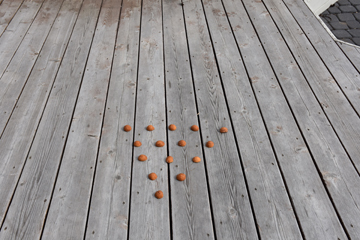 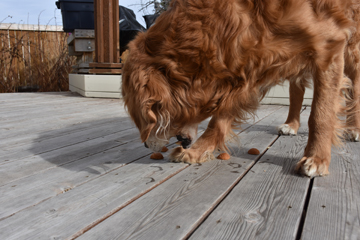 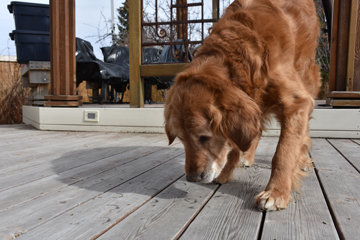 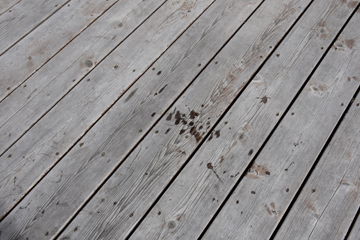 Nothin’ left but a pile of drool

Linking up to Wordless Wednesday

I found this new iPhone app called Superphoto.  It allows you to apply filters to your pictures.  I especially like the painting filter.  It makes my already beautiful “kids” look even more beautiful. 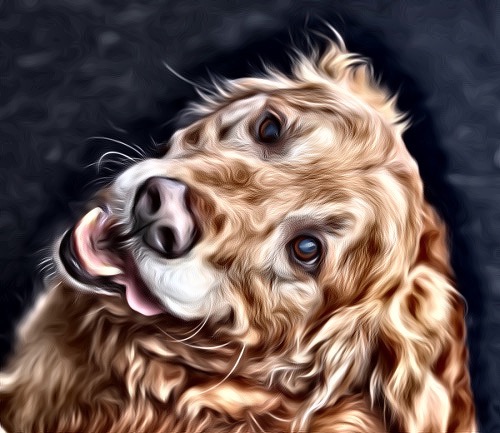 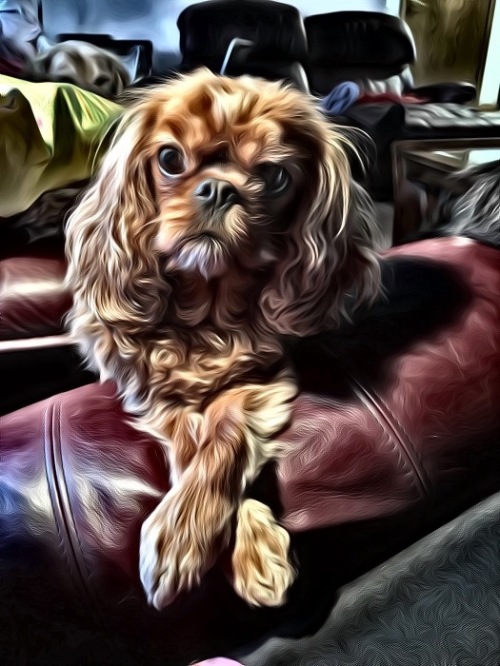 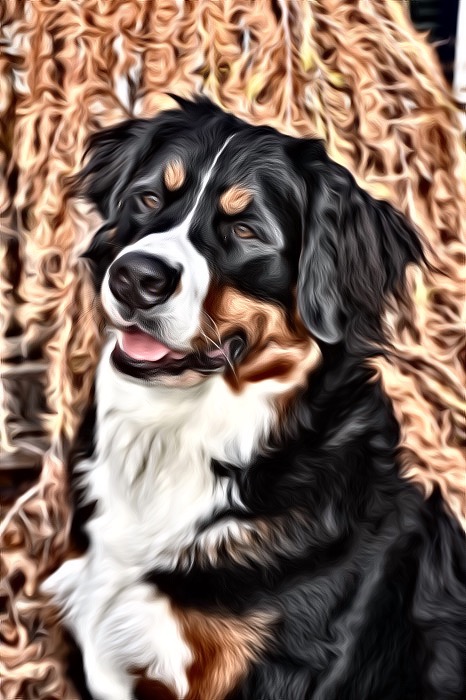 Linking up to Wordless Wednesday at Blowpaws:

Way back in October 2003, when he was only 2-1/2, Wally’s first litter of puppies were born.  There were 12 beautiful, pure bred Golden Retrievers.  I was drawn to one of them immediately because she was a lovely dark red/golden colour like her Dad.  I named her Bella and I was lucky to foster her until she was 6 months old. 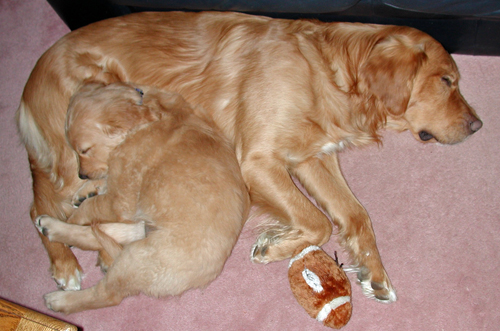 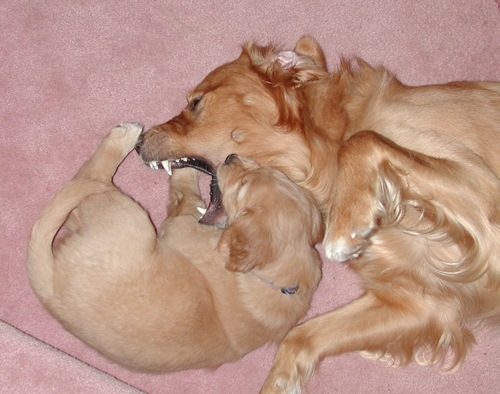 The last time I saw Bella was when she was 2 years old but Wally has not seen her since she left us in April of 2004.  That was until now.  Wally is 14 years old and Bella is 11-1/2.  They took one sniff of each other and it was like they were long time buddies.  Bella is a little slow moving and has some trouble with stairs but the two of them ran around and played like puppies.  It was so wonderful to watch. 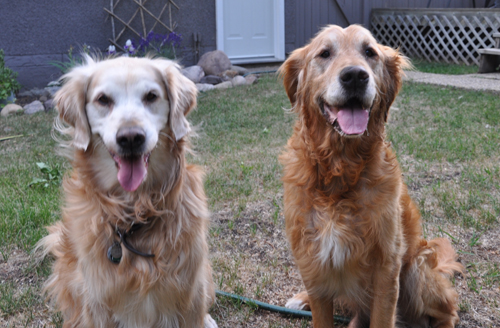 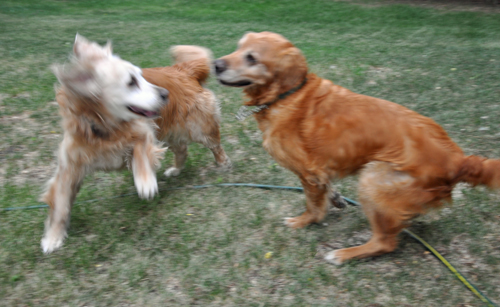 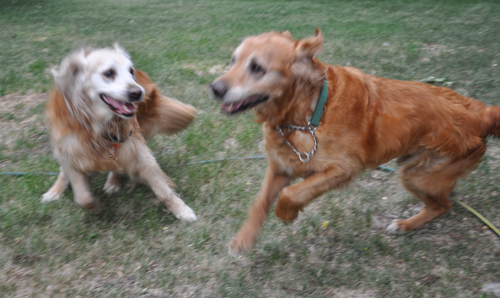 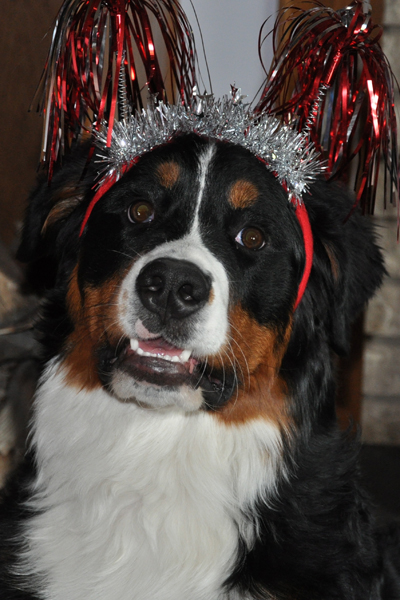 A few weeks ago I read a very moving post about a dog that passed away unexpectedly. Her owner wanted a do over. Although she had literally hundreds of pictures of her beloved companion, she had none of her with her dog. The story struck a cord with me. I hate having my picture taken and I am always hiding from the camera. I have only a handful of pictures of me and Wally together. My boy is 14 now and he has already lived longer than the normal life expectancy of 12 years. I’m grateful that I saw that blog post. I don’t want to have the same regret when my very special boy goes over the rainbow bridge.

Tilly and Spirt hanging out together on the couch

Linking up to Wordless Wednesday at Blogpaws

Meet our newest family member Spirit.  She is a Bernese Mountain Dog and she will be 10 weeks old on Feb 7th.  We just picked her up tonight and brought her home.   She already has her own blog.  You can find her at LIFEWITHSPIRIT.CA 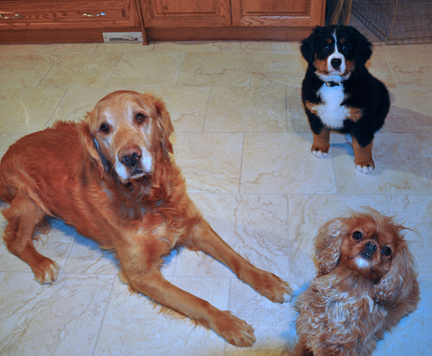 Linking up to Wordless Wednesday at Blogpaws

I can giggle now when I look at these pictures but at the time I felt so sorry for my little girl.  She woke us up in the middle of the night crying in pain.  We rushed to the emergency vet and we discovered that she had a very swollen and infected anal gland.  They had to drug her and open it up to drain it.  When we got home she had trouble standing and holding her head up with the cone of shame on.  I made a little nest for her in front of the fireplace.  When she was a little more conscious I gave her a little yogurt (that accounts for all the extra white around her chin) to help offset the negative effects of the antibiotics they put her on.

Linking up to Blogpaws Wordless Wednesday 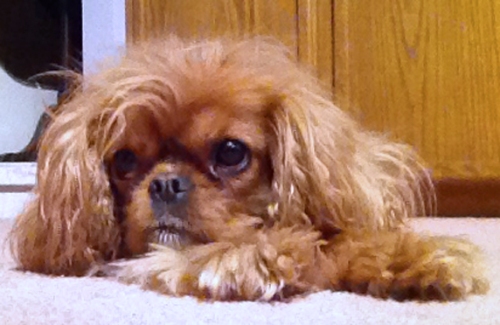 Linking up to Wordless Wedneday at Blowpaws Powered by Linky Tools 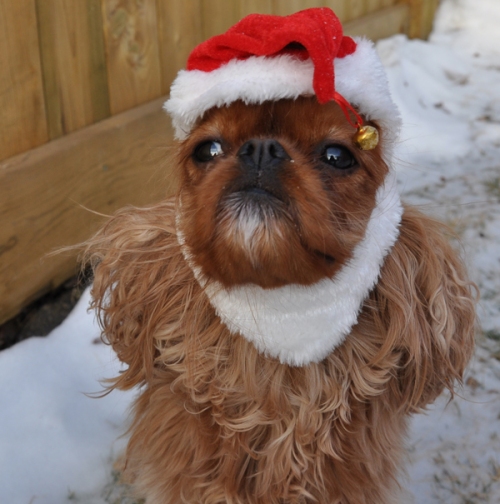 Merry Christmas from the Dog House to your house.  Linking up to Wordless Wednesday at Blogpaws.

Linking up to Wordless Wednesday at Blogpaws.

Earlier this year SARShop.com contacted search and rescue groups from around the world asking members to submit photos of their dogs.  Their plan was to produce the first Search and Rescue calendar.  We submitted a couple of pictures of our beautiful Tango and then promptly forgot about it.  Just a couple of days before Tango crossed over the rainbow bridge we received an email telling us that Tango’s picture had been chosen for the calendar.  This weekend we received our complimentary copy of the 2015 calendar.  It was very emotional for us to see our girl’s picture in the calendar.  The picture above is the one they chose.  She is part of a group of pictures for the month of July.

Back in 2012 this picture of Tango was chosen to hang in the Royal Alberta Museum as part of their Wolf to Woof exhibit. (read more about it here). 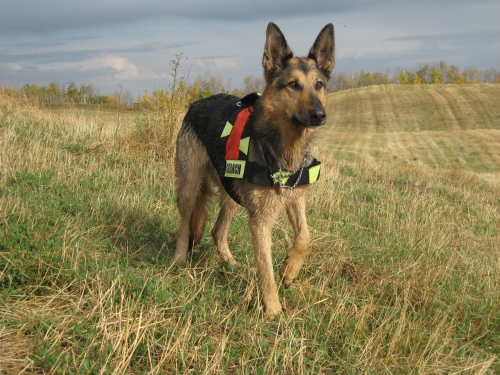 Just a few more pictures of our girl.  She always looked like she was smiling.  Gosh I miss her……..

When I have been sitting at my sewing machine for too long, Tilly likes to poke her head up between my legs and demand that I stop piecing and give her some loving.

Remember Me? I need a little attention here!!!

The temperature went from being almost +20 degrees celsius to -17 in just a few days.  It was such an abrupt temperature change that we did not have the chance to gradually adapt to the colder temperatures.  I went for a run and my boy wanted to come with me so badly that I just couldn’t say no to those big, beautiful brown eyes.  He got geared up with fleece booties, a jacket and a makeshift fleece ear protector held together by a hair clip.   The second day I switched to a long neck warmer and pulled it up over his ears and that worked a lot better.

As you can see by the expression on his face…..he was not amused….but he was warm.

We spent a beautiful fall day at Patty’s farm/acreage.  The dogs always have a wonderful time running free in her fields and eating as many cow pies as they can find.  Wally does enjoy eating a few of them but his first love is rolling in them.  My boy has never met a pile of poop that he didn’t want to roll in.   We dressed him in a long sleeved t-shirt to try and keep the poop out of his beautiful golden locks.   Unfortunately we had to take it off when it got too loose around his belly and he peed all over it.  Then the dogs found the dug out and went in for a quick swim and drink.  The other 5 dogs got out fairly clean but our Wally got stuck in mud half way up his body and had to be pulled out by Patty.    Talk about a mud bath…..now he has to have a ‘real’ bath…but he was pretty happy with himself.  I’m still amazed at how active and agile he is for a old man of 13 years…..14 in April. 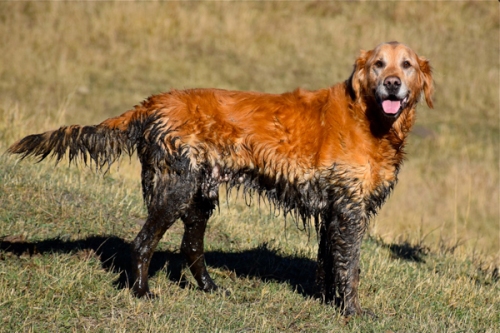 Our girl loves her food and when she thinks it’s supper time she does her best to make sure we know it too.

My little helper has to be on my lap no matter what I am doing.  She likes to peak around the monitor just to make sure I see her and to make sure I am not eating anything that she thinks she should have. 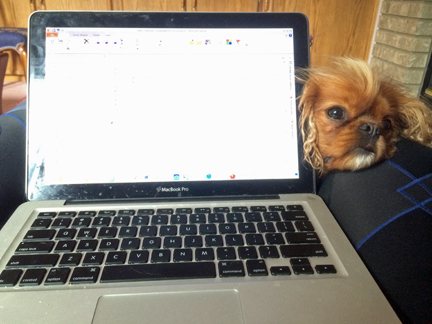 Mom and her Boy 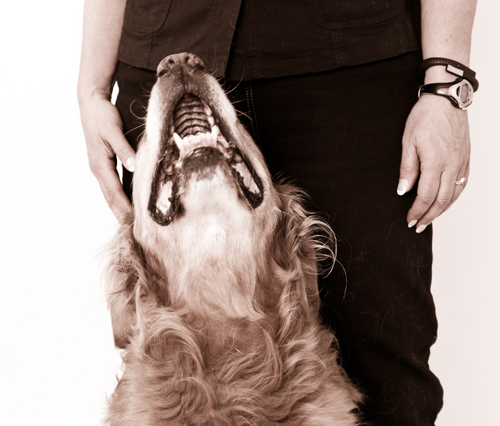 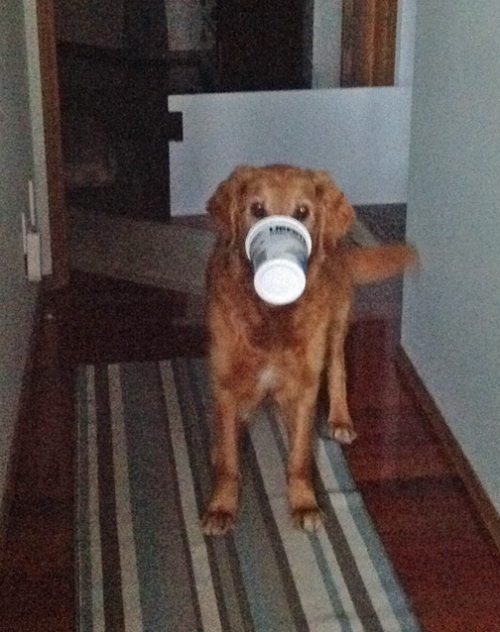 As Tango’s degenerative myelopathy progresses she is having a harder time trying to walk around.  She is constantly getting her back legs crossed or having them slip out from underneath her.  She can still bunny hop/run fairly well but changing direction and stopping are a real challenge.  We ordered a wheelchair for her and we have started getting her comfortable with it.  This is a video of her first time testing her new wheels.

Linking up to Wordless Wednesday at BlogPaws