I found a local Cavalier King Charles Spaniel group on Meetup. Now that Tilly has had all her shots, we can finally go to one of the group get togethers. We met at the Doggie Style Deli on Sunday. It was the first time that she actually really got to play with another dog. At the off-leash park, all of the dogs we encounter are either so much bigger than her, they play too rough or they aren’t interested in her…..so she has never really had the opportunity for a good play session. Although all the Cavie’s today were bigger, they all got along very well. The owner of the Deli had a German Shepherd that was really interested in Tilly and played much more gently with her than Tango does. Unfortunately I forgot to bring my camera so I had to rely on my iphone.  I got some fun video and a few blurry pictures of the gang together. 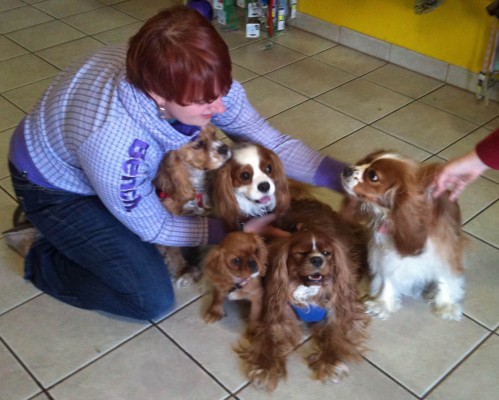 One response to “Cavalier play date”