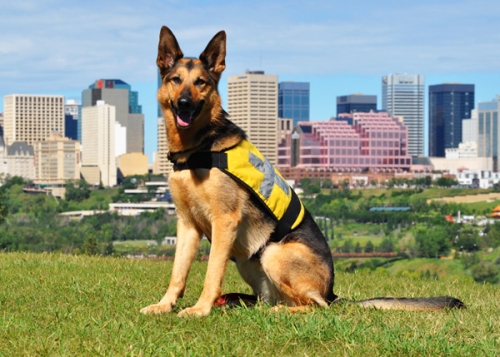 Tango has another certification to add to her list. Yesterday she passed her Cadaver test. There were 3 fields set up. Two had an unknown number of samples and one had none. Don had 20 minutes to search each field. At the end he had to identify how many samples were in each field and which field had none. He was a little nervous and wanted to be very thorough so he took the full 60 minutes to complete his test (some of the more experienced handlers completed all 3 fields in 20 minutes). Our girl found every single sample and made us very proud. It is amazing to think that just a little over a month ago they started learning this new profile.

Dogs can smell things humans can’t because they have more nasal membrane than we do. We have about 65 square inches of nasal membrane, while dogs have about 900 square inches — an area that’s greater than that of a dog’s whole body. The nasal membrane is packed with olfactory receptors, specialized cells responsible for detecting scents. A German shepherd typically has about 220 million olfactory receptors, while a human has about 5 million.  Experts believe that the bigger the dog and the longer her muzzle, the keener her sense of smell will be. German shepherds aren’t just better at sniffing out scents than humans are, they’re better at it than most other breeds of dogs. A terrier may only have 150 million olfactory receptors, and a dachshund has about 125 million. As human remains decay, they produce a variety of very distinct odours. The odours are like a signature, because they appear nowhere else in nature. A cadaver dog can actually detect human remains through concrete, buried underground, or at the bottom of a body of water, using its extremely well-honed nose to search for faint traces of the chemicals emitted by the human body during decomposition.

In search and rescue operations, cadaver dogs can be used to ensure that every body on the site is found, so that the family can have peace of mind and closure. A cadaver dog can also be used to search for a missing person, or for someone who is known to be dead.

In addition to being used to find whole bodies, cadaver dogs are also trained to react to any trace of human remains. This can be very useful in crime investigations, because a cadaver dog can indicate that a cadaver was in a particular location at one point, even if it is no longer there.  They can also find traces of bodies which criminals have attempted to conceal by destroying the evidence.

One response to “Congrats to Team Tango!”